Florida boy not ready for hills...

My last race was my first experience at a Rev3 triathlon - Rev3 Knoxville Half. You hear from people, blogs, and other discussions like Slowtwitch that Rev3 is top-notch. Rev3 didn't disappoint!! I truely believe that Rev3 has the athlete in mind and not the dollar signs. The atmosphere is relaxed and athletes are taken care of from the awesome swag and personalized name on transition box.

I am truley humbled to be part of the Rev3 team! The teammates are so amazing and talented. It was so awesome to meet so many new faces! The week started with drive up from Florida to North Carolina to stay at Abby's parents cabin in Maggie Valley. We arrived in the afternoon on Friday. Saturday morning, we made our way to Knoxville with showers and thunderstorm all the way to Knoxville. By the time we got settled in the hotel room that we are sharing with Marco and Hannah (so awesome to spend time with them since they moved to Colorado a few months ago), the rain has stopped and we got our packets and swag...great blue seventy goggles (there orange!!)!

Surprisingly, I was pretty relaxed during the whole day even though I really didn't have my stuff together or got to ride or run until later in the day. I contribute that to Rev3's atmosphere and that I had very little expectations for the race. I mean I did have a game plan...which went to pot, but that's later.

The best part of Saturday was being able to meet as many as possible Rev3 teammates at the swim practice, which we got our new Pearl Izumi racing kits!! They are very awesome! Super comfy! The shorts actually fit my butt...I have the Stevenson butt (big butt...skinny legs). Being new to the team, it was difficult to remember the names so hopefully by Florida I will have the face and name matching. I got my swim in (about 10 minutes). The water was good. Clean and easy to sight. Definitely wet suit legal at 66 degrees!

After getting a ride and run in, Hannah, Marco, and I headed to transition to drop off our bikes. Transition was a first for me...1st time transition was in a parking garage thanks to construction on the University of Tennessee campus and 1st time I got to rack my bike in a bike box with personalized name!! Rev3 does it right!! Now it's time to relax and get some food! Oh yeah, have a few beers!

Race morning started at 5:15 am! Had some breakfast and hydrated up...grabbed my transition bag and gear...wait forgot something, head back...ok ready to go...oh crap need my helmet, head back...ok ready to go..I think. At least I never made it to the elevator. Got to transition and got all set-up. Headed back to my room by run warm-up with drills. Realized I forgot to put my computer on my bike..oops, maybe I shouldn't be so relaxed. So I decided to have Abby hand off my computer during my transition run to T1...yeah, I know that's a penalty...oh well.

Swim
Got down to swim start which is up river about 0.5 miles from the finish. Gorgeous morning!! About 15 minutes till my wave I had a Powerbar Latte Gel and started getting my suit on! Thanks to SBR Sports for the trislide to help make the process flawless! I love trislide! Wave about to start!! So excited!!

The swim was great! Water felt perfect...no waves like the open water we have in Florida! Had my Blue Seventy nero goggles, which were perfect going into the sun. I started in front middle and once the horn went off, I sprinted for about 100 yards to find clean water. There was a group of us, maybe 6 or 7 for about first 1/4 mile, then I found myself with another guy for the rest of swim...he did not swim straight! He probably swam into me about 7-8 times during my swim...come on!! For all the swim, I felt great. I wanted to have a solid swim that pushed the pace, so I was very happy when I heard I was around 30 minutes out of water... officially 29:50.

T1
Transition 1 was a little longer run than usual, because of construction but it wasn't bad. I found Abby for my computer and headed to my bike. I did have issue getting my computer onto my bike quickly so I probably lost a minute or so...I guess I deserve that. 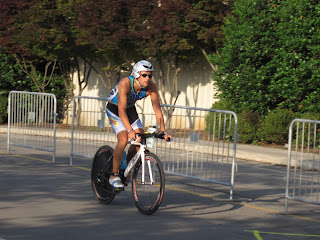 Bike
Ok so doing research, the bike had about 1500 feet of climbing...so I made my training for Knox as I did for 70.3 World Championship in Vegas, which had 2500 feet of climbing. I figured I can handle1500 feet with similar training that I did for Vegas. I had a plan of watts to try and it keep around 240-260. I wanted to be aggressive. 10 miles into the ride...that plan went out the window. The climbs were not long but just a steady up and down...power up and keep speed up on the downhills...repeat...repeat...repeat! 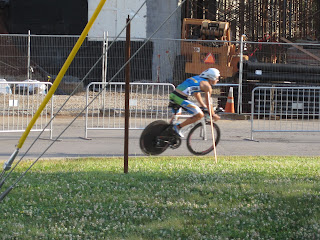 The course was very beautiful with hills and countryside. I enjoyed it out there! I just was not prepared for the course...I'm a Florida boy with straight, flat bike rides. I didn't take advantage of the downhills being hesitant of the turns on the downhill. My nutrition was solid for the bike. Had two bottles with water/powerade/Powerbar Kona Punch gel dissolved in the water plus a gel of Latte Gel...about 350 calories for the ride. Not much, but I'm pretty efficient. Back to the hills...so no way the bike was only 1500 feet. After the fact, I found out a few numbers that made more sense...3000-3300 feet, which makes more sense. Marco and Hannah both did the olympic distance and got 1700 feet for just under 25 miles. I got my arse handed to on the bike! My power profile was horrible...so spicky. Got back into town and finished the bike just over 2:30. Officially 2:32 with trashed quads!


T2
Very simple reverse of T1, but had an issue finding my number since someone had their wet suit over my bright green shoes (always look for them) and had issue getting my wheel into the box because again someone's wet suit was over it...come one people...keep your stuff in your area. 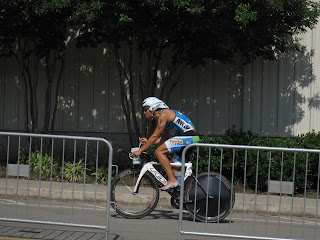 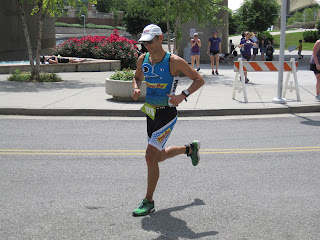 Finally got my Swifwick socks on and my shoes...ready to rock! The run started out simple and flat...sweet...I was plugging along trying to find my running legs at 6:50-6:40 pace, until I got to the olympic turn around...hills...more steep, short climbs just feeding on my quads! I just trying to plug up the hills and try to turn over the legs on the downhills. This worked well for next few miles until I reached mile 10 or so just felt I had nothing left. My stride became shorter and less heel kick. Nutrition wise I felt it went ok. I didn't get any stitch cramps like I have in a few 70.3 races. I decided to stay way from gatorade and just use coke/water/gels. I actually love the 82GO water plastic bags because I could get 16 oz of water at each station to cool myself and drink some. Each station I would grab two waters and a coke. I had one Powerbar gel around mile 5 into the run. Muscularly, I just wasn't prepared. Weather wise I was! One advantage of being from Florida that the high 80 temperatures and high humidity was fine, like a normal training day. The last 3 miles were mostly flat except the final 0.2 or so to the finish, but I was in survival mode and just pushed as hard as I can. The finish was pretty awesome! Great place to have the finish. Groups of people cheering you on and huge jumbo screen! Officially ran 1:39...not very good, but with trashed quads then I'll take it. 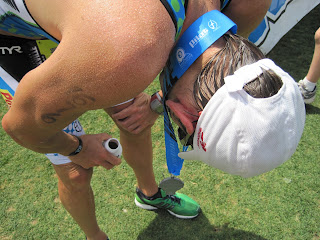 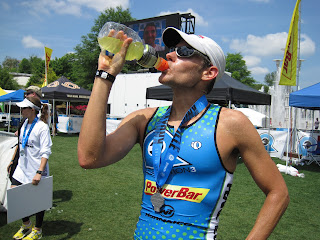 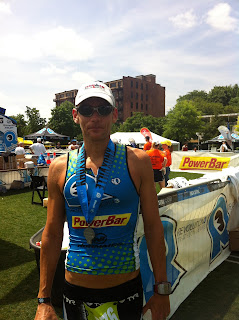 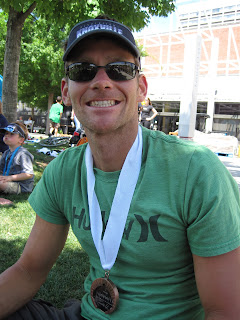 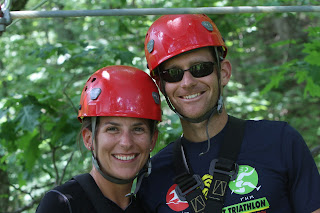 Overall I finished 3rd in Age Group and 12th Overall: 4:50 total time. Kind of disappointed but given the circumstances of the course and my training that I'll take it.

Now it was time to relax with some beers at Downtown Brewery and some time in Asheville. Abby and I love Asheville! We went zip lining then to Wedge Brewery for some IPAs! Zip lining was awesome! Great way relax after a race. I got to enjoy the North Carolina mountains before heading back to Florida on Tuesday. 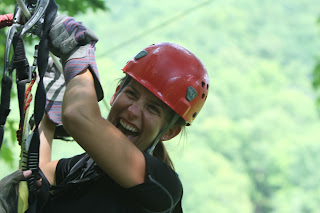 Next up is one of my "A" races for the year...Eagleman 70.3...flat and fast (hopefully fast for me)! Lots of long intervals on the bike at power race pace and running intervals of 800's and miles!


Most importantly, I would like to thank so many sponsors....Rev3, Powerbar, Swiftwick, SBR Sports, Pearl Izumi, Blue Seventy, NormaTec, mix1, and Tempo Cyclery (best bike shop)

John
Engineer turned chemistry teacher who found running in 2004 and in 2007 triathlons. I was hooked after my first race. I love the competition with myself and with others. I love pushing my body to places I never thought would be possible. I coach girls cross country and distance track. It's great pushing others to get to their goals.